I got my first (and last and only) tattoo about 10 days ago.  Yes, it hurt!! It wasn’t some random act of rebellion; it was a sign of solidarity with my sisters who also each got one. Usually we do things the same, but thankfully, we each chose what we wanted  instead of settling for a single message.

I got a bow and arrow, after some deliberation. No, not because Kevin was a hunter. I decided that something as permanent as a tattoo had to have perpetual meaning for me. One of very favorite quotes is from the poet Kahlil Gibran, and his book The Prophet is the basis of my most of my philosophy of life. I studied it in a humanities class in high school, and it has stuck with me these past 40 years. There is a chapter in this book that reads:

Your children are not your children. They are the sons and daughters of Life’s longing for itself. They come through you but not from you, and though they are with you yet they belong not to you.

You are the bows from which your children as living arrows are sent forth. The archer sees the mark upon the path of the infinite, and He bends you with His might that His arrows may go swift and far. Let your bending in the Archer’s hand be for gladness. For even as He loves the arrow that flies, so He loves the bow that is stable.

I have interpreted this in my tattoo.  I am in the bow from which my children have been sent forth into the world, and they have indeed gone swift and far.  I am also an arrow from the bow that was my parents. My marriage was a bow, from which Kevin has gone forth to the infinite, and from which I am now soaring on my own path. The picture of my tattoo is next to the one from Gibran’s book. 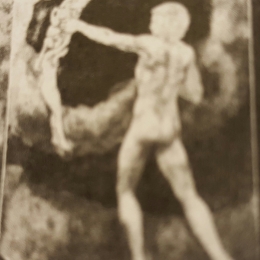 Gibran’s drawing from The Prophet

Do you have a tattoo? If so, what does it represent? If not, what would it be about if you were to get one? I’d like to hear from you.