My cousin Mary Jo just let her Lucy go over the Rainbow Bridge.  Another friend Shawna saw her dog take the same trip.  And yet another just found out his dog, whose health has been precarious, is in steady decline and has developed a strong heart murmur.  It’s so sad to hear all of this, partly (or maybe especially) because I have two of these furry loves, and one has been closer to this path at times than I want to think about.

We got Buddy when my youngest son Gabriel went off to college.  It was several months later, and I apparently had a strong need to nurture that Kevin thought would best be filled by a puppy. It was truly love at first sight, and 12 years later, there is still a special connection between me and my Bud. 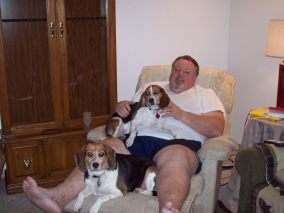 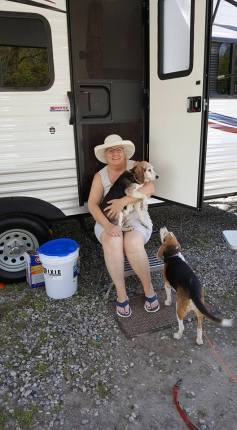 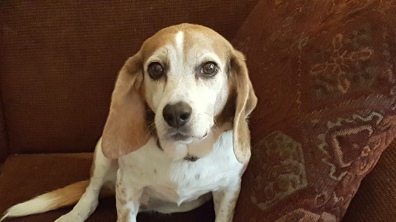 We got Buddy a brother two years later because he was exhausting us, and we thought a playmate would help him release his energy.  It turns out that beagles never lose their energy, no matter what!!  While Buddy has required a few thousand dollars in medical care and medications, Bo is the poster-pup for the perfect beagle.  Maybe it’s because Buddy really has needed me that I am so very fond of him.  And yes, Bo has his special moments, too. Bo is the cuddler in bed, the one who sticks his head under my hand to get me to scratch his head, and the one who naps right next to my leg. Buddy is the dog at my feet while I’m working, the one standing guard when I go to the bathroom, and the one who can’t help himself but get underfoot when I’m cooking in case I accidentally-on-purpose drop something to nibble on.

I’ve thought I was close to The Big Decision for Buddy a few times since Kevin died. Once when he was a puppy we did almost lose him to a reaction to a vaccination where he spent the night in the Vet’s ER trying to get a 105 temp to break.  So I know what being “this close” looks like.

It’s a hassle sometimes to have to make doggie-care arrangements when I go out of town for work.  And of course, there is a financial cost to that, too.  There’s the other money required also – for food, treats, vet bills, Rx, shots, tags, and and and. But when I walk in the door and they are so happy to see me they almost pee themselves, it’s all worth it. Every time, every dime.

I knew when I got them I could expect to have them with me somewhere around 12-15 years.  Every time I hear of someone else’s furry child leaving this Earth, I do a little grieving for my dogs who are still here with me, hoping they are not on borrowed time yet.  I hurt for you and for me.  And I love mine a little more, giving extra treats today, and extra petting. Grief is still grief, no matter who or what you lost.

Feel free to share a picture of your furry kids. I’d love to see them.  I’ll even show them to Buddy and Bo.