How can it be that nearly another month has gone by since my last post? I have all the best intentions to post regularly, but things just get in the way. My writing falls by the wayside, which is unfortunate because I really enjoy and otherwise feel the benefit of being productive and contributory somehow. Naturally (ha!), I have some good reasons this time for the days between posts here.

Some interesting changes have taken place in my life…which means I have changed as I navigate the transition time from of an “event” until I find the “new normal.”  As you know, I’ve been grieving the death of my 13-year-old beagle Buddy last June. More difficult than my own sense of loss has been watching the effect on my other fur-baby, Bo. He went into a doggie depression, not wanting to get off the bed or the couch, not wanting to even be near me, reducing his food intake, and showing a general lackluster attitude. It is so painful to watch this and feel helpless. It was like watching him slip away even though he was still right here. I scrambled to try several different ways to help him bounce back – and I should have known from my own experience that you can’t make anyone (even a dog) feel and express and “finish” their grieving and mourning. Treats, toys, walks, cuddles, petting, indulging.  I even tried to find another beagle to bring into our home, but strangely enough, all three of those attempts failed for one reason or another: someone else adopted the dog already, I felt no connection, the dog had health ISSUES I didn’t want to deal with, whatever….

And then I got a call from a rescue operation I had put in an adoption application with about a young (2 year old) female Morkie who was available. As cute and playful as she was (is), she wasn’t going to be placed with a family with young children because she had shown some “aggression” tendencies when her toys were taken away from her. My first thought was, “why do you have to take her toys away?” But of course, children would. I said I would consider it. It happened that the current foster parents  had a death out of town and needed to leave, so would I be willing to foster her, introduce her to Bo, and see how she worked out in our own home…a trial run of sorts. And so Chloe (now Sasha) came to stay for a few days that turned into a week and now is permanent.

Bo wasn’t enamored, to say the least, but he didn’t act out either. Basically, he ignored her, even when she tried to engage him in play time. Ah, indifference; it’s as hard to observe as outright dislike or rejection. Sasha is a lap dog and loves to cuddle and kiss. A few nights after she was here, she jumped off my lap to go slurp some water. Like a flash, Bo was off the couch and onto my lap, where he has not EVER sat in 11 years, and he staked his claim for a full 45 minutes.  As if she had planned it and was now going to bask in her success, Sasha just went and laid on her blanket without protest. Bo hasn’t come back to sit on my lap again, so I guess he feels like he made his point and is okay with things now. They actually walk together quite companionably, but otherwise they mostly ignore each other in some kind of truce. 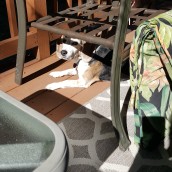 Well, I love having this little girl to bathe and fluff and comb out. (Beagles get bathed, but there is absolutely no grooming to be had.)  I bought her a few dresses and a new harness.  (Yes, Bo got a new harness and leash just because, too.) A new crate, a booster seat for her in the car, a few new toys. It felt so good to open myself up both as giver and receiver. Truth: I could do without all the licking of my hands and cheeks but we’re all  learning to live together in harmony.

Two weeks went by. Barely. Somehow between September 12 and 22, I agreed to foster another dog, a refugee as a result of  the Florida hurricanes. Transport was delayed, but on September 30, I finally greeted Rascal (now Harley) and offered him a safe haven until a new home could be arranged.  Can you say FOSTER FAILURE?? Yes, that would be me! A 12-year old, toothless, partially blind Yorkie stole a piece of my heart and wouldn’t give it back.  Today I signed the adoption agreement so we can be his furever home.

Three is a bit much sometimes, I’ll admit. The good news is that he shows enough spunk to deflect Sasha’s occasional attempts to spark some  interest out of Bo, and Bo has decided to step up and help me train these other two by showing off how to “sit” and to “come,” and to go potty outside.  I have made sure to let them all know Bo is still First Dog (even though I am the Alpha) by feeding him first, harnessing him up first when we get ready for a walk, and letting him be the one to sleep in bed with Mama. He seems to appreciate that, and he shows me so by looking to me for “good boy” signals and not fussing around the little ones when they get too close. His appetite has returned, as has his interest in what’s going on around him. The additional benefit is that I, too, have found more opportunities to laugh, to exercise, to engage with my neighbors when they see the Crazy Dog Lady coming, and to relax and enjoy the moments.

I was raised to be a wife and mother, and my last boy baby has been gone from home for 14 years. Next month it will be 3 years since Kevin died. I don’t mind “Solowingnow” these days; it fits me quite well.  But it also fits me to share my heart and my home again. 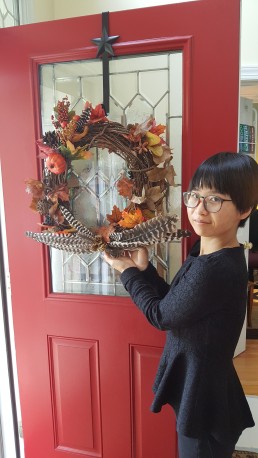 I have also opened my life up to a 27-year-old Chinese woman who is studying for her Ph.D. at the local University. Her name is Yawei, and I’ll introduce you to her in a future post. Let’s just say for now that I’m seeing some sides of me that have been dormant for too long. It is amazing to me the things  I have said yes to, even when I have been adamant about saying no more often.

What it all means:

My loss three years ago when Kevin died has uncovered other unfinished grief that I am now embracing. My doubts about my future have slowly vanished as I’ve identified and focused on the priorities in my life. Recognizing that I have options and making deliberate choices has become more than an academic exercise of making lists of pros and cons; there is a knowing-in-my-heart confidence that has come from taking time to make meaning, not just take things at face value or be superficial in the effort so I can “just” move on with my life. My discomfort with not having answers all the time has given way to the fun and excitement of discovery – like opening a gift that turns out to be a part of me I had forgotten. The level of understanding I have about how I got the way I am, who I am when I’m alone, what’s truly more and most important, is all a fascinating journey. I feel myself being more generous, more focused, more satisfied because the Me I am is more whole now. The dues I have paid to get to this place have been extraordinarily, outrageously high, and I am grateful to my Higher Power that I recognize myself now.