Do you suppose Tom Cruise knew that when he cranked up some Bob Seeger and slid across the hall in his tidy whities, playing the air guitar,  he would become famous? Well, that’s the extent of what I’ve seen and know about the movie that catapulted him to movie stardom. Oh, and I have heard the “What the **** ” expression attributed to the movie Risky Business also. Anyway, I’m probably one of a handful of people who haven’t seen that movie. (I also have never seen any of Star Wars or Star Trek shows either, but that’s another story.) That’s not to say I am unacquainted with other kinds of risky business. Here are three examples from just this week.

Not the movie; I did see that one. This is the dog, a rescue puppy I agreed to foster. He’s a cutie pie, a real love bug. He is a Beagle/Chihuahua mix, and I was told he was about 13 weeks old. I’d probably only have him a week, since he was cute and young and little. It’s now 10 days 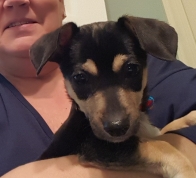 , and I’m hoping the woman who comes to meet him tomorrow wants to take him home.

The first problem with any puppy coming into my home is that I already have three other dogs: Bo, a 12 year old Beagle; Sasha, a rescued 3 year old Terrier (Westie? Yorkie?)/Maltese mix; and Harley, a rescued 12 year old (?) Yorkie who is deaf and blind. Try saying Rambo and Bo and get the right dog to respond to you. The name is a challenge. He is also more active, and Bo especially doesn’t like all the commotion, so he barks (or bays, as Beagles do). A lot.

The second problem with a rescue puppy is that they aren’t reliably house-trained. Or forget reliability; they just aren’t. They pee and poop wherever they want. You can kennel or crate them all you want, but as soon as you take them out, they dribble in your arms or on their way to the door. Particular to rescues, in my experience, is they get grain-free poop-inducing puppy chow, so they have to go poop several times a day. Good thing he is cute!

The third problem with a rescue puppy is that they haven’t had all their shots yet, so you can’t be too careful socializing them or walking them outdoors. Which means they are on leash under your immediate care and watchful eye A LOT. Then when there is a threat they have been exposed to Parvo before you ever set eyes on the cutie pie, you get to worry about your own dogs and you get to take him to the vet for shots and other medication, just in case.

Finally, the fourth problem is that a rescue’s age is a guess, so the vet said this supposed 13 weeks could really be closer to 10 weeks.  Meaning they have all their sharp, pointy, baby teeth. And like a human baby who is teething, they chew ON EVERYTHING to relieve the pressure. They chew on fingers, on blouses, on chair legs, on wooden doggie gates, on plastic food dishes, on squeaky toys, on books and magazines, on table clothes that float to the floor, and the edges of step stools and cupboards. Luckily, no electrical cords. Good thing they are small and cuddly!

In spite of all the challenges associated with a puppy, they are still cute and lovable, especially when they fall asleep in your arms or slather you with kisses and licks. I need the attention, and I need to know I can give as much as I get. The real risk is that you will fail as a foster and not want to let them be adopted out. That’s how I got Sasha and Harley! It’s a good thing I have learned the difference between being loving and falling in love. That is what let me foster Lily and Bandit this past winter and help them find good furever homes. So I am ready for Rambo’s prospective new mama to come meet him, and I really really hope she likes him enough to give him a chance. She has another dog at home already, so the real issue is whether or not the fur babies will get along.  Risky for her, too. Risky for Rambo. Risky for the pet sibling.

My daughter posted a picture of a woman she worked with who happens to be very controversial. Her politics aren’t for everyone, as my girl stated in her post. But she did also point out that the woman was kind to her and good to work with. The backlash from supposed friends who didn’t think my daughter should have agreed to work with this particular woman was the worst kind: passive aggressive. I’d rather someone come right out and say what they think than play around with sarcasm and veiled comments, making assumptions, and not fact checking the propaganda they were sharing.

It happens that neither my daughter nor I are not of the same political bent as the woman. The verbal attacks against my daughter, though, were unsupported. I have been politically quiet for years, due to a long career in the courts…which are neutral, apolitical entities where I come from, and which I agree with.  The Third Branch of Government is part of a system of checks and balances, not a party-aligned system of granting indulgences.

I stood by my daughter, publicly and proudly, and challenged a particular man who was intent on getting his word out, and essentially hijacking the original post for his own purposes. I told him that I felt she had the right to choose her work, and for him to try and shame her or embarrass her was  inappropriate and insensitive. He came back at me, and we parried for a bit. He said I did not know who he was, and I said it didn’t matter; he didn’t know me either. Finally, my daughter snuck in a comment that she was glad he finally met her mother. Didn’t stop him, or our debate. Ultimately, I remembered that you cannot win a rational argument with an irrational person, and I said my last words and signed off.

It’s not the first time I have defended my children. There was the time I took on the basketball coach of my junior high son for keeping the team at a nearly three hour practice session. And that other basketball coach of my son, which escalated to a meeting with the school Athletic Director and resulting in my 12th grade son getting benched in retaliation, proving my point of what an immature, unprofessional coach he was. I’m sure those weren’t the only times I made my kids cringe. There was also the teacher I sought a restraining order against, and the counselor I complained about to the local medical board … Suffice it to say, the Mama Bear is alive and well after a few years of hibernation. Still, you never know in these politically-charged days when the debate will get too personal and take on a life of its own in negativity, bashing, regret, or even hatred that gets acted upon. Risky business, indeed.

The third risk I took on this week was to sign up and participate in National Novel Writing Month. It is an international movement, the purpose of which is to encourage writers to start and finish a 50,000 draft in the 30 days of November. That’s 1,666 words per day, folks, which can be a lot! For reference, what I have written in this post up to this point is 1251 words, and I have invested an hour already but will need to go back to edit and format still before I post. You’ll note that my last post was in September, and it is now November 1. It can take a long time to get coherent thoughts written down!

My point is that my words don’t always flow easily and effortlessly every day, all day long. I need a compelling topic to write about, or the block of time I want, or a sense of urgency or timeliness, or something to get my butt in the chair to write. I don’t think it’s so much a matter of discipline, although that could be part of it, but it’s more a lack of commitment to a regular schedule or to completion of a goal. Commitment is more of a decision I stand behind, a promise to myself so to speak. Discipline, on the other hand, has a more negative connotation to me, a punishment of sorts, making what could be a fun endeavor into a chore.

In the case of this novel, I have gone public by registering on the NaNoWriMo website to declare my intention and put myself up to the challenge. I even tried to post my picture, but it keeps getting rejected as too large a file. Anyway, I had a friend do it last year. She started on November 1, wrote every day, and finished her draft that month. By Christmas she asked me to be a reviewer before she sent it off to an editor, by March I had a printed copy in my hand, and she was recently up for an award for new authors. I was impressed, to say the least. I’m not one of those who say “if she can do it, so can I, ” but I was inspired to know that it is possible. If I put my mind to it.

I also have found a local writing buddy. We plan to get together a few days a week for at least a few hours to work on our respective projects. A local co-working business has offered desk space free of charge to anyone participating in NaNo. The puppy is hopefully going to his new home tomorrow, so no more excuses.

It’s risky to put yourself out there in such a way. The first hit when you get behind will be to your momentum, which can easily snowball into quitting entirely. Then the ego gets involved and starts getting defensive and making excuses, probably blaming others along the way. It’s one more loss to add to the pile of losses, proving that I’ve lost my mojo, or I never had it to begin with – which is probably worse.

When one is vulnerable, as I have been during the grieving process of these past few years, it’s easy to withdraw and backslide. I truly feel like I have worked my way through my grief and found a comfortable, productive place from which to move forward.  The end is over, and the new beginning has definitely begun. Being willing to take some risks is proof positive of the healing that has taken place. Of course, most wounds leave a scar, sometimes invisible ones but scars all the same. Having healed doesn’t mean I  have packed away the old feelings or forgotten them; it means I have recovered strength and found hope for the future. Later this month will be the fourth anniversary of Kevin’s passing. I’m proud of myself for having made it thorough this valley, and I’m looking forward to the climb now. This getting-on-with-my-life is risky business.

This post, not including pictures, is 1906 words. Just so you know, this is comparable to how many words are needed every day for NaNoWriMo.